A major highlight of the event was the keynote speech given by Hiroshi Mikitani, the CEO and co-founder of Rakuten. If you don’t know, Rakuten is a major player in international e-commerce. Rakuten is a hugely popular e-commerce site in Japan. And as a company, Rakuten has aggressively expanded its international reach, notably through a high-profile acquisition of Buy.com a few years ago, as well as by buying Kobo, an  e-reader company.

The main point of Mikitani’s talk was that Rakuten empowers 3rd-party merchants to build meaningful relationships with consumers.

Mikitani and Rakuten see their fate as being intertwined with the fates of their 3rd-party merchants. So by making things easier for these sellers, both groups will see hopefully see longterm success.

How does Rakuten attract 3rd-party merchants? By attracting customers! That’s been the goal of their acquisitions. By purchasing companies attractive to consumers, like Kobo and Wuaki.tv, a video streaming service, they bring new customers to their sites who are ready to buy from their 3rd-party merchants.

Rakuten currently has nearly 40,000 3rd-party merchants selling over 140 million products. Compare that to Amazon, with data collected by SellerEngine Services for our own keynote presentation at SCOE 2013: 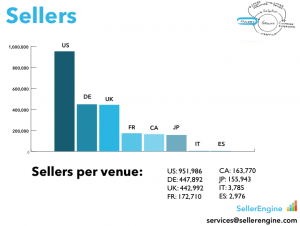 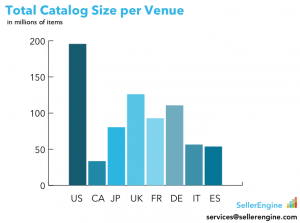 You can see that Rakuten’s marketplace has a ways to go before it catches up with Amazon.

Rakuten was founded in 1997 with only 5 employees. They were the last major IPO before the tech crash of 2000. Today they have $13.8 billion in market capitalization and operate e-commerce sites in 13 countries!

They even have a baseball team, the Rakuten Golden Eagles!